Is it Sunday again?! 😀
I'm sitting at the kitchen table with big daughter; she's working away on her computer and I'm looking at the photos on my phone, getting ready to add them to my blog post.  "I can't believe we've got to the do the weekly food shopping list again already," she says to me, out of the blue, and she's right.  It's food shopping list day again!
So what have you been up to this week?  Anything exciting?  It's been a bit same old, same old here, much as it has been for the last few months, with the addition of endless rain and some gusty winds.  Even the dog hasn't looked too excited at the thought of going out of the door, but we have managed some walks between the rain showers and he's enjoyed himself once we've got outside.
It was lovely to get back to Bewsey Meadows near Callands in Warrington - this is one of the places that inspired my Wildflower yarn and I had forgotten how many of the flowers would be out at this time of year.  It was all looking a bit gloomy when we set off, but it was warm enough, and the colours of our surroundings seemed even more vibrant against the dull sky. 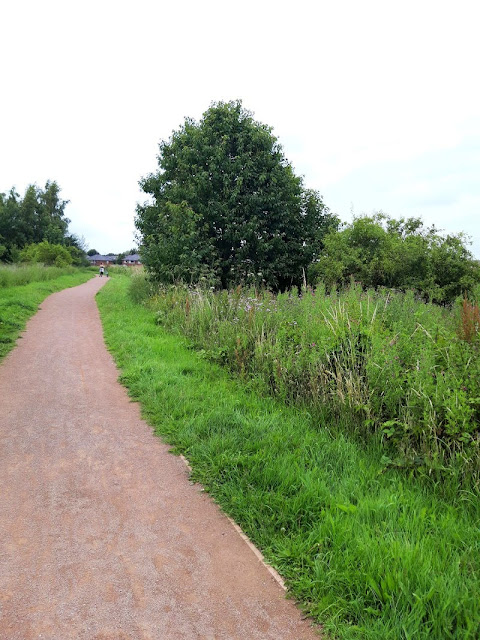 I'm not sure what this plant is called but there was an abundance of it as we walked along.  I like the way the flowers seemed to look fluffy once they were open ... 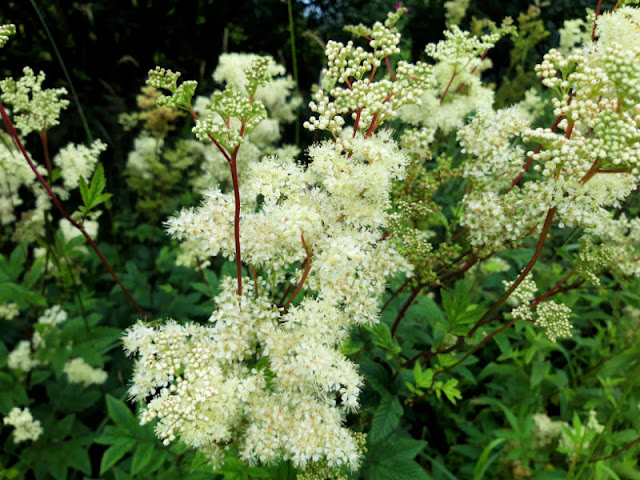 And the blue Chicory was out too.  This flower was most definitely an inspiration for the Winwick Mum Wildflower yarn ... 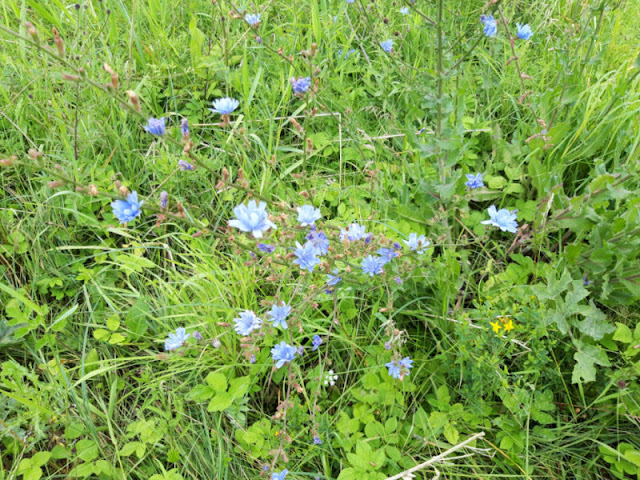 It definitely doesn't seem a year (and a bit) since the yarn was launched, along with the others in the West Yorkshire Spinners Winwick Mum Collection, and it's been lovely to see on social media that so many of you think that Wildflower is just the right yarn for this time of year too!  I think that blue is just beautiful! 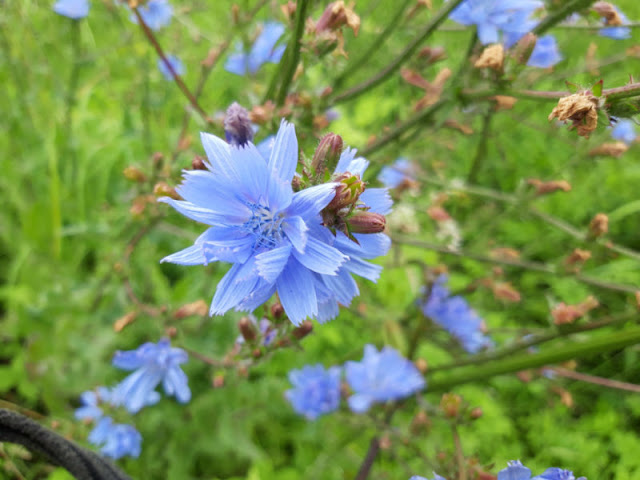 I can remember posting about this flower last year - it's called Orange Hawkbit or Devil's Paintbrush and as lovely as it is, I took the advice of not encouraging it into my garden as it is very invasive.  Oh but that orange, it's so pretty, isn't it? 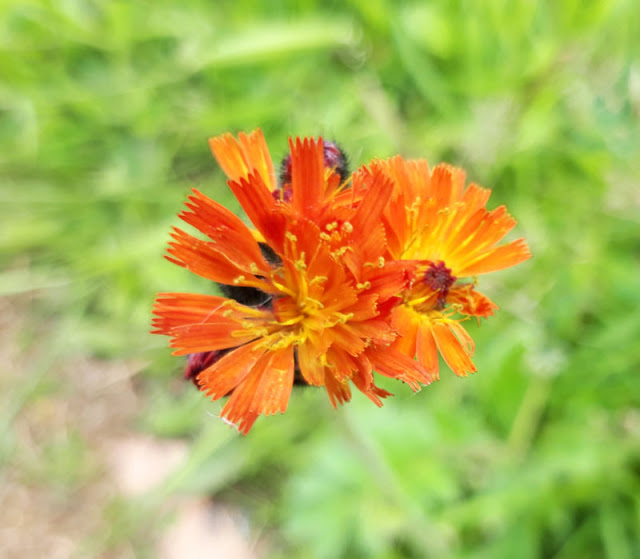 There were lots of teasel plants too.  It reminded me that I used to have those in the garden but I haven't seen any at all this year.  Teasels are biennials so they spend the first year growing the leaves and then flower in the second year of life, scattering the seeds ready for the next generation.  Foxgloves are the same, so in theory, to get a continuation flowers, you need to sow them every year but they will only flower the year after you've sown them.  I've obviously managed to miss a year with the teasels (to be fair, they were growing in the flags where the dustbins go and as they are huge plants that grow up to 6 ft tall and are pretty spiky, it's not unreasonable that I pulled them up!) so hopefully I'll spot a plant next year, otherwise I'll be hunting down seeds to start again.  I think they're lovely, if rather tall and spiky, and the bees adore them.  (I must confess, though, that the way the flowers grow in a stripe does make me think of certain headband-wearing celebrities ... here and here 😀) 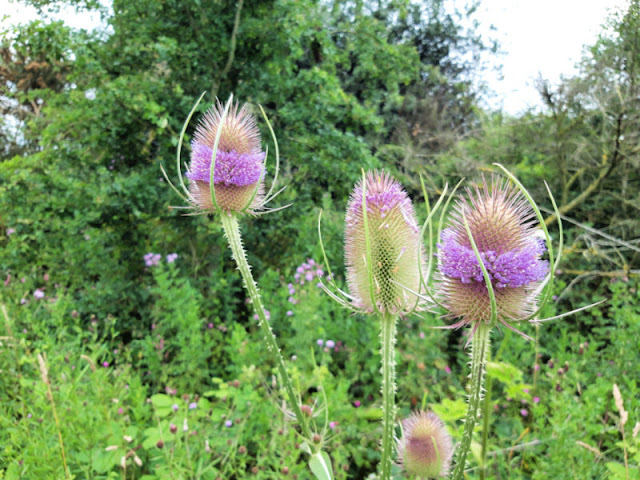 Further along the path, we spotted the swans with a huge brood of cygnets this year - in recent years the cygnets haven't made it past a few months old thanks to "predators" (I don't like to think what they might have been).  Fortunately, I spotted them before the dog - it was the couple with the bag of food that alerted me as I knew that the dog would feel obliged to help them out and that would have been a BAD idea - and I managed to get him on his lead and past the swans without him noticing.  The picture is fuzzier than I had hoped, but I took it from quite a distance away and zoomed in rather than trying to get closer and risk the dog spotting either the swans or the couple with the bag of food.  It's like walking a big, hairy, very greedy toddler sometimes! 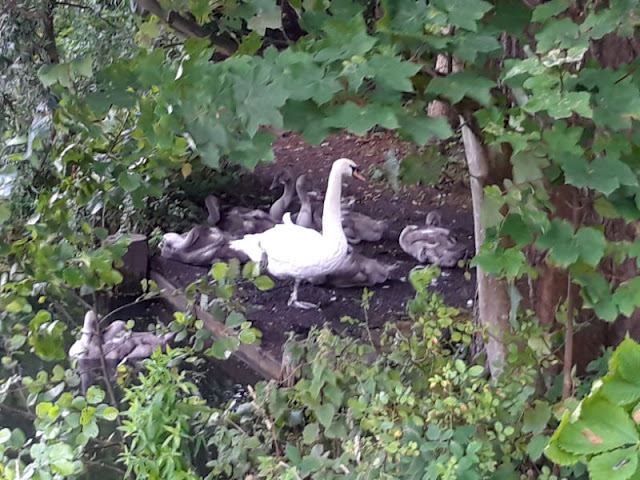 Once we were safely past the swans, the dog was able to go off his lead again and was delighted when we made it into the woods.  There are all kinds of smells that keep his tail wagging here, and a small stream that he likes to paddle in, grinning at me with his big doggy grin as he stirs up the mud at the bottom and then shakes himself all over my trousers. 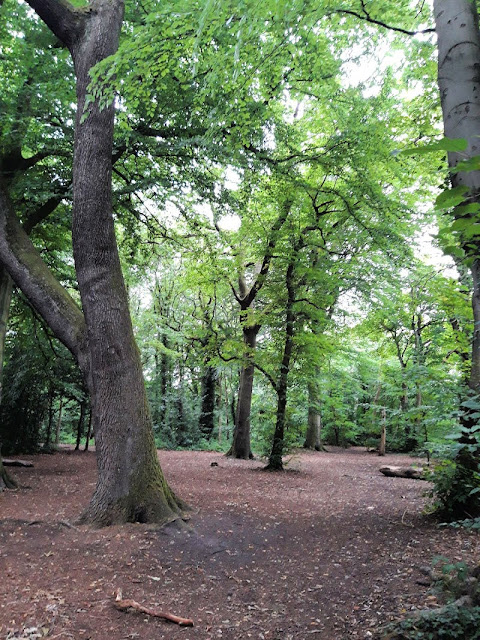 Back home, the sun had come out for a few brief moments so I rushed into the garden to see what was new.  The calla lilies (Zantedeschia) had come out since I last looked.  I do like these very much, they always seem very exotic to me and I am always delighted to see them - it feels like a bit of an honour that they bothered to grow and flower again.  Yes, yes, I'm not getting out enough, you don't need to tell me! 😀 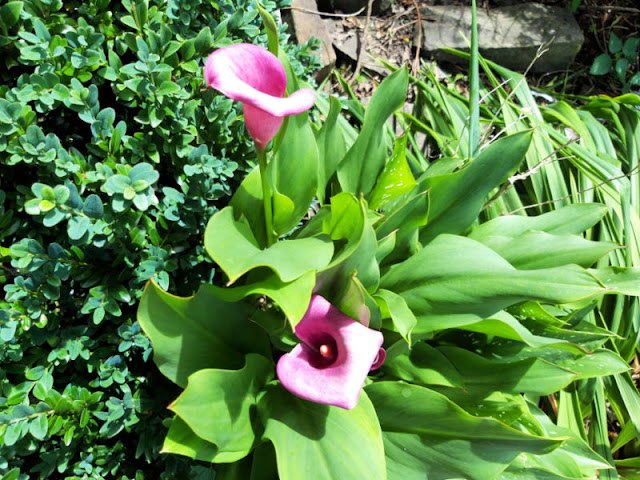 Look!  My globe flower (Echinops ritro) has flowered too. I love that it goes from this spiky ball ... 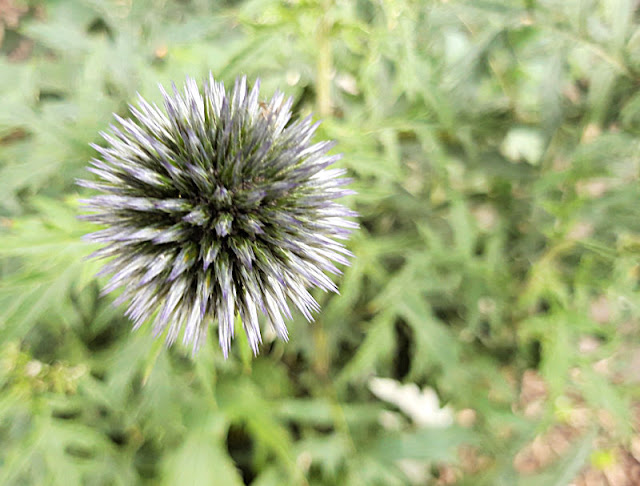 to this ... and it's another one that the bees adore so I am always very happy to see it in the garden. 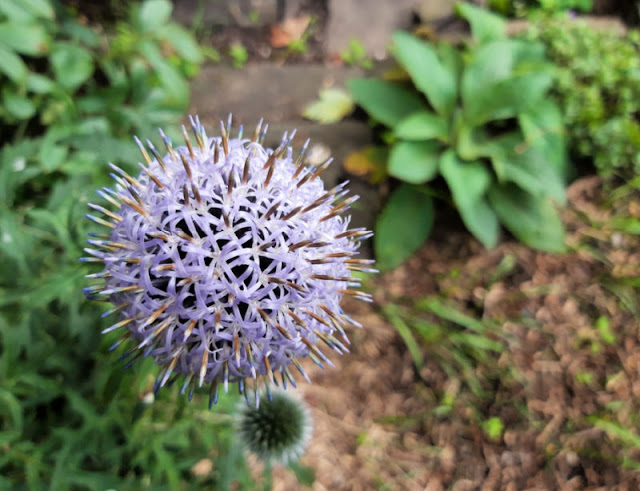 Do you remember a couple of months ago I spent some time digging up Crocosmia that was threatening to take over the garden?  The plants that I left have started flowering now and are much nicer now that there are less of them!  It really is a pretty flower, it's just a shame that it feels the need to take over the whole garden to show itself off! 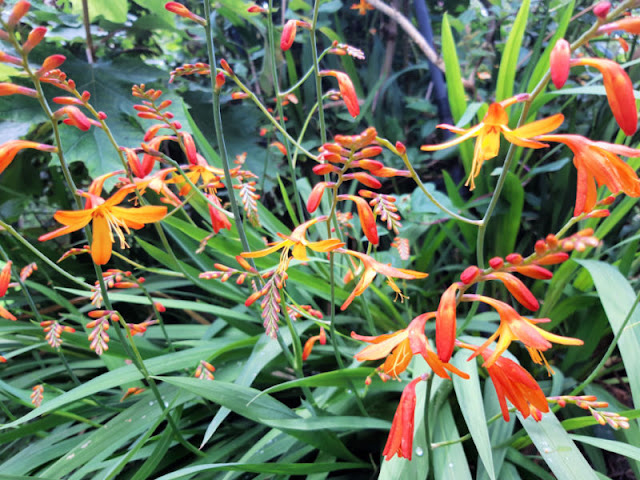 And look at these too ... broad beans straight from our garden!  It's lovely to be able to go outside and pick something that you're going to eat within a short time.  I'm willing the tomatoes to grow faster but they're just doing their thing so I'm having to be patient and let them get on with it! 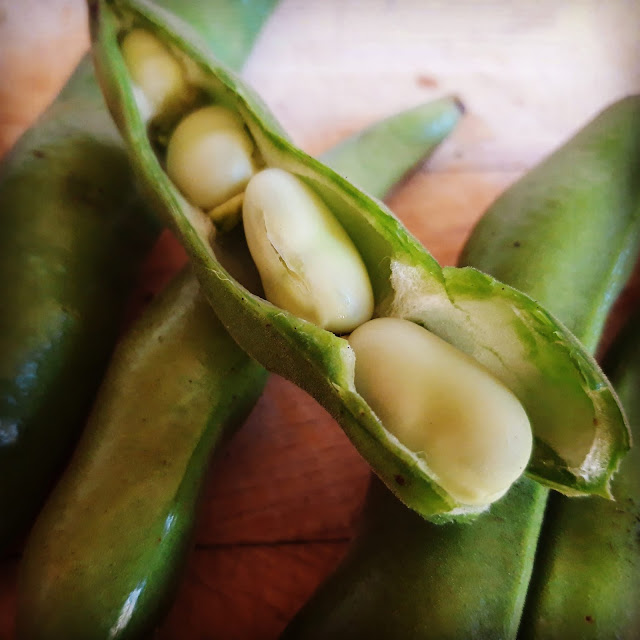 And that's me for today ... I have done so much knitting recently and I can't show you any of it just yet, which is very frustrating - although it'll be great when I can!  I can tell you, though, that I found these two videos on YouTube which have been extremely useful as I have been knitting so much that my arms have been feeling the strain ... this one for stretching the extensors in your forearms and this one for stretching the flexors.  There are lots of exercises both in internet and YouTube searches for knitters, so if your hobby is starting to become a bit of a pain, then you need to do something about it before it gets really bad!
So on that happy note, I'm going to love you and leave you ... have a wonderful week and I'll catch up with you again soon! xx
Winwick Mum at 20:08
Share

Thank you for visiting! I really appreciate you taking the time to read my blog! xx